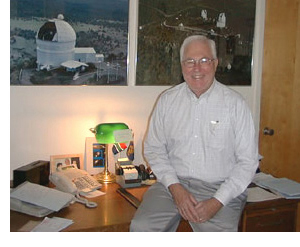 
Frank N. Bash, Ph.D., served from 1989-2003 as director of McDonald Observatory, one the world's foremost astronomical research institutions and a pioneer in public outreach and informal science education.

A native of Medford, Oregon, Bash earned his bachelor's degree from Willamette University in Salem, Oregon; his master's degree in astronomy from Harvard University; and his doctorate from the University of Virginia. A well-known and widely published specialist in radio astronomy, Bash joined the faculty of the University of Texas at Austin in 1969. He served as Chairman of the University of Texas at Austin Department of Astronomy from 1982 through 1986. In 1985, he was named the Frank N. Edmonds Regents Professor of Astronomy at UT Austin. As a researcher, Bash is interested in large-scale star formation processes in spiral galaxies. He has won numerous awards for the quality of his teaching, and was named to the teaching excellence Hall of Fame at UT Austin in 1984.

As Director of McDonald Observatory, Bash led the effort for design, funding, and construction of the magnificent new 11-meter Hobby·Eberly Telescope at McDonald Observatory in West Texas, which has the largest primary mirror in the world. The only comparable telescopes, Keck I and Keck II, in Hawaii, each cost nearly $100 million to build. The Hobby·Eberly Telescope cost $13.5 million, due to its cost-effective design. This design makes it possible, for the first time, to contemplate construction of the next generation of telescopes, of up to 29 meters in diameter.

Bash also led the effort to expand the public-outreach programs of McDonald Observatory. These programs include the Observatory's Visitors' Center, which hosts over 130,000 visitors per year, the Texas Astronomy Education Center, which is currently under construction and StarDate radio, which reaches millions of people each day in English, Spanish, and German.